Life is not a story, a settled version. It’s an unsorted heap of images…images that float to the surface of the mind, rise, fall, drift – and return only to drift away again… — Patricia Hempl, The Art of the Wasted Day

I love photographing and trying to wrangle art from fog. So I say, knowing all the while that fog is not really a subject, like dahlias or dachshunds, viney cottages or vintage cars. Fog is a shifting scrim over any number of subjects that we see dimly, or anticipate seeing, or see and suddenly do not see. If the fog is uniformly dense and still, the subjects flatten, barely contrasted. If the sun yanks the fog away, like a magician with cape, there’s a moment of ooh and awe, and the subject blinds with Wordsworthian trailed glory. But then that subject solidifies into its quotidian self, yoked to its solid task of being a tree, a fencepost, a stuccoed house.

If I’m out shooting, the sudden disappearance of fog saddens me. At the other extreme, I am bored by high or leaden fog. What gladdens me, what fills up my camera’s memory cards and empties out its battery, is fog that briefly reveals the lines of a subject but not, or not yet, the tangle of normalcy surrounding it. It’s the tease I love, the guessing, the hinting and pulling back. It’s not the opened present I love, but its opening.

Yes, it’s ironic that from my life in fog — which, in Patricia Hempl’s words, has no “settled version” — I emerge with still pictures. And yes, I admit, after all this conjecture about the lure of the liminal, that perhaps my infatuation actually stems from photographs my Grandfather took in the middle of the last century, and which I admired from an early age. Grandpa was a farmer, and a shutterbug, and the photographs (I’m including one here) lovingly show a flock of his sheep in the burning mist of an Ohio morning.

Perhaps no one explanation is needed. Anyway, until the truth comes clear, I can produce and share these visual hints, and enjoy wandering through the flux and flow that images can only begin to suggest. 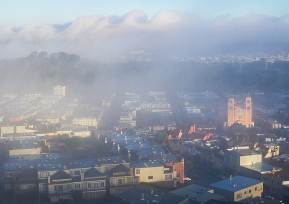 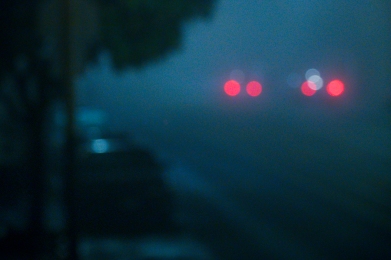 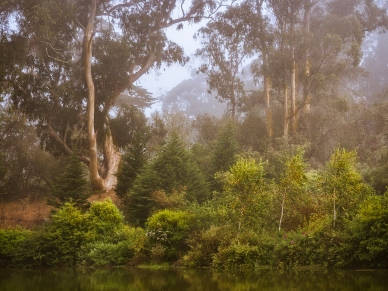 Freighter in the Golden Gate